Raif Badawi’s wife refuses to kowtow to the “diversity” ideologues

I congratulate Ensaf Haidar for her call to ban face-coverings in public services and for her support for Maxime Bernier’s criticism of Trudeau-ite multiculturalism.

As most people are already aware, Ensaf Haidar is the wife of Raif Badawi, a Saudi writer, dissident and activist who has been imprisoned since 2012 in Saudi Arabia. His only “crime” was to call for a liberalisation of the Saudi regime.

Ensaf Haidar now lives with her children in Quebec and all received Canadian citizenship on July 1st 2018. Haidar has worked tirelessly for her husband’s release and for human rights in general, and has received several awards for her efforts. Two recent examples are the 2017 Goldene Victoria, awarded by the Verband Deutscher Zeitschriftenverleger (Association of German Magazine Publishers), and the 2018 Henry Zumach Freedom From Fundamentalist Religion Award from the Freedom From Religion Foundation (FFRF). 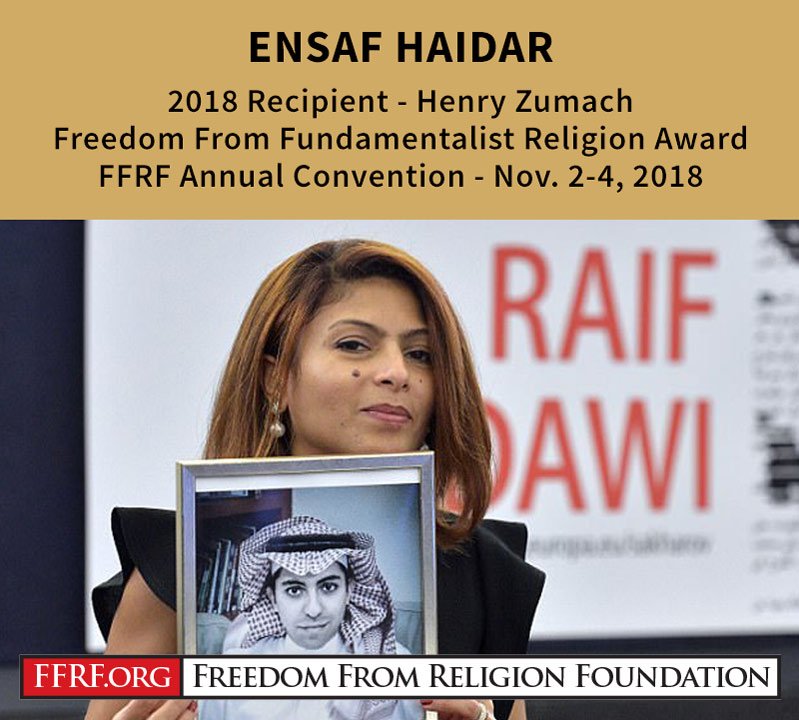 Just as her husband defied Saudi orthodoxy by calling for freedom of expression, Ensaf Haidar challenges Canadian orthodoxy by exercising her freedom of expression in defiance of the conventional ideology monolithically imposed by most Canadian mainstream media and politicians, especially the federal government of Justin Trudeau. On her Twitter account @miss9afi, she has repeatedly urged the new Premier of Ontario to follow Quebec’s lead and ban the niqab in Ontario schools, public transportation and government services. 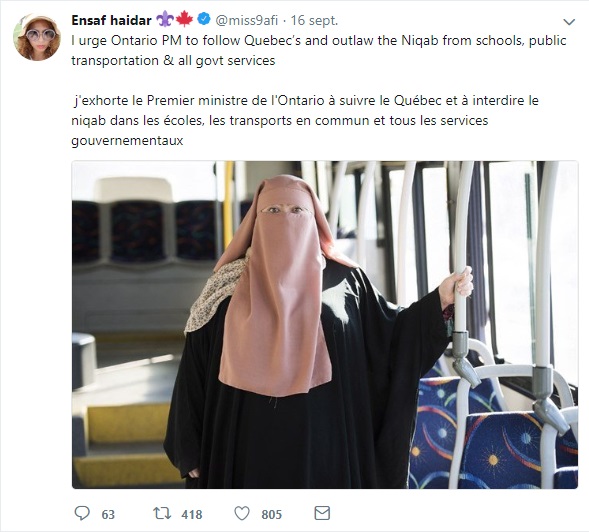 “I urge Ontario PM to follow Quebec’s and outlaw the Niqab
from schools, public transportation & all govt services”

Unfortunately the comparison with Quebec no longer applies, because article 10 of Quebec’s Bill 62, which banned face-coverings in public services, has been suspended by the courts and the Quebec government has failed to make any effort to fight back against the suspension.

Furthermore, Ensaf Haidar has expressed her support for Maxime Bernier’s criticism of Trudeau’s dubious cult of “diversity,” despite the fact that Bernier has been the target of an enormous degree of contempt and demonisation from the media for a position which is, in reality, eminently reasonable. Tarek Fatah writes about this in his article of September 18th, Why Raif Badawi’s wife supports Maxime Bernier in the Toronto Sun. Haidar expressed her shock at the negative reaction to Bernier and his new political party (People’s Party of Canada or PPC) in a tweet on September 18th.

“I am shocked at the reaction to my support of the #PPC and @MaximeBernier,
I will listen to myself and look for the new change”

Trudeau’s “diversity” is simply […] a buzzword which he uses to set the stage for spurious accusations of racism or xenophobia against anyone who criticizes his pandering to religious minorities.

I do not support Bernier’s new party—its economic policies are those of the libertarian right—but I agree with his and Haidar’s criticism of Trudeau’s obsession with what Bernier calls “extreme multiculturalism.” Indeed, Trudeau’s multiculturalism is cultural relativism, leading to complacency and inaction in the face of religious fanaticism. Trudeau’s “diversity” is simply code expressing his extreme intolerance of any disagreement with his ideology, a buzzword which he uses to set the stage for spurious accusations of racism or xenophobia against anyone who criticizes his pandering to religious minorities.

I congratulate Ensaf Haidar for her principled support for Bernier’s criticisms and for her opposition to the Trudeau-ite obsession of allowing religious face-coverings anywhere and everywhere.

Next blog: The Quebec Election of October 1st 2018