The “Antifa” movement claims to oppose fascism. But its actions resemble the behaviour of fascist thugs more than those whom it opposes. The recent events in Quebec City are an example.

The accompanying image by Branco, which draws a parallel between the Antifa and Nazis, is an exaggeration, but it is not a gross exaggeration. On the contrary, I would call it just desserts, considering how Antifa groups demonize anyone they disagree with as fascist, racist, etc. Let them taste a little of their own medicine. Furthermore, the Antifa often behave as violent, dangerous goons, recalling the behaviour of Nazi thugs. The cartoonist Branco is, unsuprisingly, a right-winger. Why is it that such criticism rarely comes from the left? People on the left should be criticizing the Antifa movement because it discredits the left. 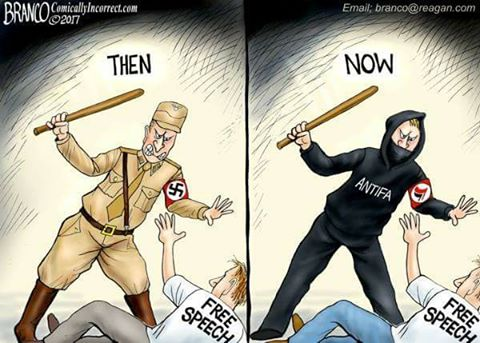 It would be more accurate to say that the Antifa are the shock troops of what has become known as the “regressive left” (which is left more in name than in reality), i.e. the pseudoleft which sees fascists everywhere except where they exist (i.e. Islamofascists) and which has poisoned and corrupted the left in several countries, including the USA, Canada and France. Sam Harris summed it up well in his statement that “The Left is Irredeemable.” That too may be an exaggeration, but I fear that it is not.

If you think that spontaneously punching Nazis is acceptable, then you must condone the behaviour of those who would arbitrarily assault hijab- or niqab-wearing women or anyone else they might perceive as being Islamofascist.

Was it not the Antifa movement which came up with what is arguably the stupidest and most dangerous meme of the year, if not the century: “Punch a Nazi”? If you think that spontaneously punching Nazis is acceptable, then you must condone the behaviour of those who would arbitrarily assault hijab- or niqab-wearing women or anyone else they might perceive as being Islamofascist. Considering the pseudoleft’s propensity for false positives in their never-ending search for dastardly Nazis, the slogan “Punch a Nazi” is a recipe for universal violence. Even if the person in front of you really is a Nazi, punching him or her is a stupid thing to do, unless in self-defence.

In the events in Quebec City on 2017-08-20, the group which the Antifa opposed (“La Meute”) did not self-identify as far-right. (In this blog I will not comment on a recent event in the USA. To American readers I say: do not be chauvinistic by assuming that the rest of the world is just a reflection of what happens in your country. There was no group of white-supremacists, KKKers or neo-Nazis in Quebec City.) In fact, on their web site, La Meute denies being far-right, racist, xenophobic, homophobic, misogynist, etc. But I think it is obvious they are right-wing, as their name suggests — meaning “The Pack” as in a pack of dogs or wolves — but not neo-Nazi. They are a new group and it is not yet clear just how to characterize them accurately. Nevertheless, the media have already begun labelling them “far-right” or “extreme right.” However the mainstream media, just like the Antifa, have lost all credibility in this area. They are so quick to smear people and groups with such labels that they are clearly incompetent when it comes to positioning anything on the right-left political axis. 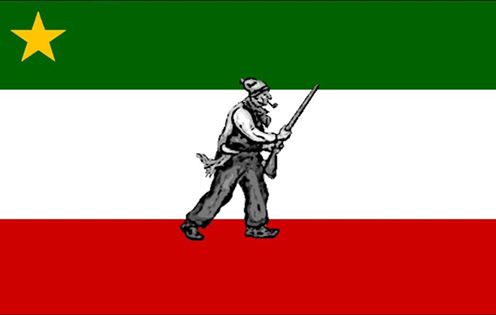 Flag of the “Patriotes” from 1830s.
Yellow star & “habitant” added by
Quebec independentists in the 1990s.

At any rate, thanks to the violence of the Antifa and the calm behaviour of La Meute, the latter came off looking more respectable. The Antifa attacked two people (not with La Meute) simply because they were carrying Quebec flags (considered “racist” apparently). One carried the provincial flag, the other the flag of the “Patriotes” who fought in the republican (i.e. anti-monarchist) democratic rebellion of 1837-1838. They injured one of the flag-bearers while chanting « Tout le monde déteste les fascistes » (“Everyone hates fascists”). The Antifa apparently oppose nationalism (although they seem to have no problem with Canadian nationalism) and seem incapable of distinguishing it from fascism. If the Antifa were truly of the left, they would honour the Patriots’ flag, not condemn it. 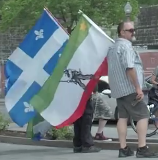 Man carrying Patriotes flag,
before and after being attacked by Antifa.
Both images from this video.

It is obvious that the regressive “left” and the Antifa play into the hands of the right by bringing disrepute upon the left. The pseudoleft hyper-polarizes the political field, alienating leftists and centrists and pushing them to ally with those further to the right, pushing them into camps which pseudoleftists may arbitrarily label as far-right. La Meute has undoubtedly garnered a lot of support because our elected officials follow the regressive “left” in adopting a policy of complacency and capitulation with respect to Islamofascism, vilifying anyone who dares to criticize the religion on which it is based.

[…] the regressive “left” and the Antifa play into the hands of the right by bringing disrepute upon the left.

To conclude, the Antifa movement may involve many well-intentioned people, but I see them as colossal jerks at best. I leave the final word to journalist Nicolas Lacroix who describes the Antifa using the delicious expression “Dollarama Che Guevaras.”