The movement against Legault and the CAQ has zero credibility.

A recent demonstration in Montreal by so-called “anti-racist” activists illustrates yet again that the enemies of secularism are sadly lacking in moral and intellectual integrity. In particular, they deliberately conflate race and religion, thus aiding and abetting religious fanaticism.

Shortly after being elected on October 1st 2018, the new premier, François Legault, and his CAQ party announced their intention to start implementing various secularism measures, in particular, banning religious symbols worn by public servants in positions of authority, i.e. police, judges, prosecutors, prison guards and teachers. This is incomplete, but nevertheless an excellent start to implementing secularism in Quebec and supported by the majority of the population and basically all secularists in Quebec. 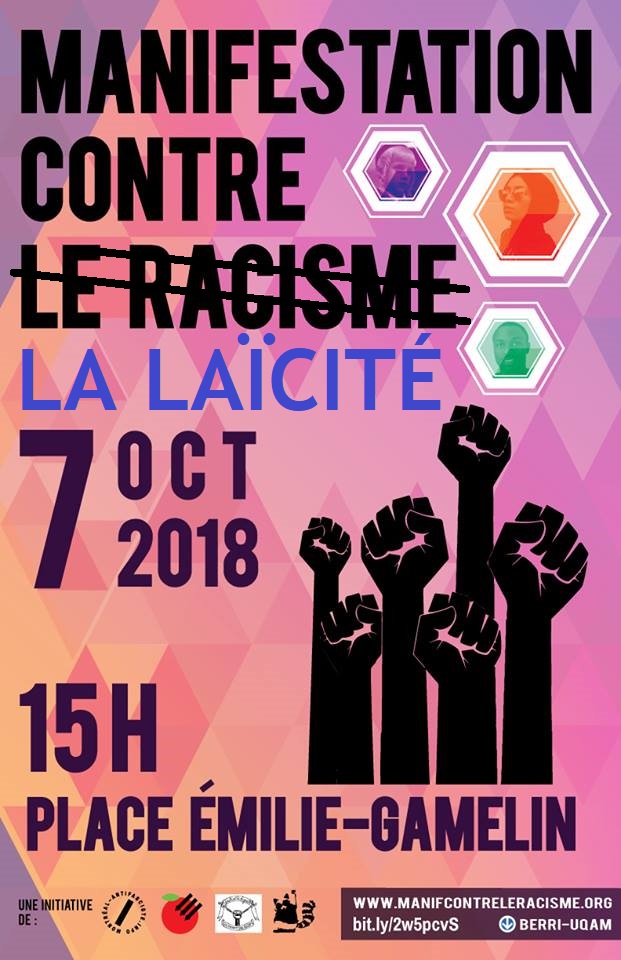 But there are forces who oppose secularism and do so in an extremely dishonest manner. Yesterday (2018-10-07) a demonstration was held in Montréal to protest the new measures. The demo was announced as being against racism, but a major focus was on denouncing Legault and the CAQ as racist.

The fallacy of conflating race and religion is a common tactic used by anti-secularists. It has been refuted countless times, but because of the extreme dishonesty of anti-secularists who falsely claim to be “anti-racist,” it is necessary to do so once again. So I summarize:

Furthermore, the anti-secularists masquerading as “anti-racists” are dishonest in several ways:

Furthermore, the opposition to any form of dress code is nonsensical and dishonest, because:

Given the above considerations, we see that those who denounce the new Quebec government as “racist,” because of its secular measures, are both intellectually bankrupt, for their arguments are fundamentally irrational, and morally bankrupt, because they oppose freedom of conscience and support the agenda of a far-right religious movement.

One small glimmer of reason from an individual who is normally a staunch ally of the anti-secularists: Manon Massé of Québec solidaire has publically stated that Legault and the CAQ are not racist. Very good. But she nevertheless opposes Legault’s plans because QS would not include teachers in the religious symbol ban. Furthermore, she did not, as far as I know, distance herself from the so-called “anti-racist” demonstration.

Anyone who cares sincerely about child welfare, especially the well-being of believers’ children, will support Legault’s proposed ban on religious symbols worn by teachers, thus helping to make public schools a refuge from religious indoctrination.

One final observation about the modern anti-racist movement, and this should come as no surprise to anyone: that movement is often racist itself. In particular, here in Quebec, so-called “anti-racist” activists often accuse Quebeckers in general of being racist. This itself is a racist attitude, an expression of anti-Québécois ethnic bigotry. In reality, the vast majority of Québécois, including those who voted for the centre-right CAQ, are more progressive that many of those activists.

Next blog: The Dishonesty of the Globe and Mail

One thought on “The Moral and Intellectual Bankruptcy of Antisecularists”