“Western women who wear the veil contribute to the subservience of women elsewhere in the world for whom wearing the veil is an obligation.” — Mona Eltahawy @NSankari @aftlpa @YasMohammedxx #Iran #IranProtests2022 pic.twitter.com/toRa9Q8jIO

@FFRF What this sign illustrates is that the so-called "woke", whom I call anti-Enlightenment pseudo-leftists, strengthen the political right by discrediting the left with their toxic behaviour. The "woke" claim to speak for the left (they do not), thus giving a the right a huge boost.

@AmericanAtheist Your declaration of "the right to wear or not wear a hijab" is a glaring example of FALSE SYMMETRY. There are situations where the wearing of religious symbols, including the hijab, should be banned: i.e. civil servants and public school teachers while on the job.

@titocurtis If you sincerely want to understand (which I tend to doubt), you could start by avoiding dishonest expressions like "hijab bans". Bill 21 does not implement "hijab bans". It bans the wearing of all religious symbols, but only while on the job and in certain positions.

The controversy which raged in the summer of 2016 over the issue of the burkini on public beaches in France led to the publication in blogs, social media, etc., of many false memes—in other words, a lot of nonsense. Here I debunk some of them.

The burkini is just a piece of cloth? Just a mundane article of clothing? Bullshit. All versions of the Islamist veil, including the burkini, hijab, tchador, niqab, burka, etc., are part of a campaign by Islamist fundamentalists and Islamofascists to normalize special articles of clothing which are banners to promote their politico-religious agenda.

That campaign is in turn part of the Islamists programme to oppose, by legal means or otherwise, secularism wherever it exists or where there are plans to implement it. French secularism or laïcité is a major target because it is the avant-garde of secularism.

False Meme #2:
Those who oppose the burkini want to ban it everywhere!

All those who criticize the burkini and other versions of the veil want to ban them everywhere? No, no & no. Many people oppose Christianity, but few would support banning it everywhere! Whether there should or should not be a ban, or rather bans, depends very much on the type of veil, the place, the circumstance, the context. I personally happen to think that it was a mistake when the mayors of several French seaside towns tried to ban the burkini on their local beaches—and for at least three reasons:

I would however support banning the burkini at sporting events and public swimming pools. At any rate, allowing the burkini on public beaches must not blind us to the nature of the Islamists’ programme. They will continue to make every attempt to score points in their fight against secularism. That is simply one more reason why secular measures must be applied with rigorous respect for the rule of law.

On the other hand, there are some who would ban the burkini even on public beaches. I respectfully disagree, but I give them full credit for recognizing the danger which the burkini, as an Islamist veil, represents. (However those who oppose any ban anywhere and consider that the burkini is just another clothing choice are intellectual slobs in my opinion.)

In light of the recent terrorist attack on Nice, the act of wearing a burkini on a beach in that region was a contemptible act of provocation. We may choose not to criminalize it, but we must condemn it. If, as I have suggested, it was a trap, then the guilty party is composed of those who set the trap. Those duped by the trap include not just the mayors who adopted anti-burkini measures, but even more so the fools who demonized those mayors for their action.

False Meme #3:
You must never tell anyone what to wear.

You must never tell anyone what to wear or what not to wear? Really? The fact is that various dress codes of various types are ubiquitous in society. Some restrictions on dress are codified in law, but many are not written down and some are not even verbalized explicitly. Sometimes dress codes are simply understood implicitly, constantly renegotiated verbally or non-verbally as people test a code’s limits by violating it in small ways while respecting it in large measure. Here are a few examples:

Some of these dress codes we could probably do without. Is it really necessary to outlaw nudity everywhere in public or where visible by the public? We can debate that. Are school uniforms really a good thing? Maybe, maybe not. Many, indeed most dress codes can be questioned. But to state baldly that ALL dress codes can be dispensed with is irrationnal. Thus, to a question such as, “Should the clothing XYZ be banned?” the only appropriate answer is another question, or rather series of questions such as: Where? When? In what context? When worn by whom while they perform what duties? Without some context for the original question, it probably cannot be answered adequately.

Furthermore, it must be recognized that personal freedoms cannot be absolute. One individual’s personal freedom is limited by, among other things, other peoples’ freedom.

Religious constraints such as the Islamist veil are no worse than secular dress codes? So when Islamists insist that any woman who does not wear the veil is impure and deserves to be treated with contempt or even raped (or have acid thrown in her face), that is the same as a secular dress code which would ban the veil for, say, public servants while on duty? What false symmetry! What specious nonsense! The first rule is a blatant attack on women’s freedom, gender equality and human dignity. The second rule is a small restriction which limits the scope of that attack. The first rule undermines freedom, the second mitigates the damage done by the first. 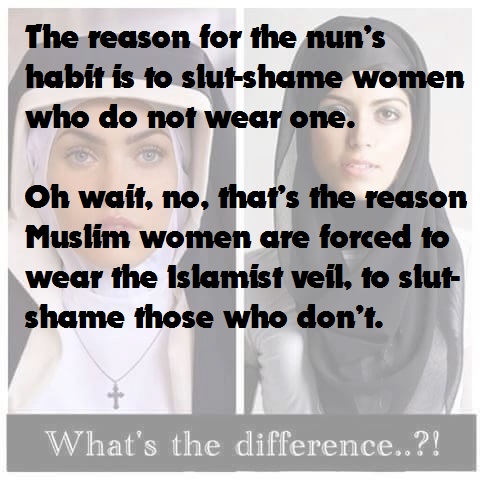 The burkini is comparable to the habit worn by Christian nuns? Really? How deplorable that it should even be necessary to debunk this stupid comparison. The habit is worn only by a tiny elite minority of Catholic women, those who have gone through a rigorous screening process. The Islamist programme is that the veil should be worn by ALL “good” Muslim women and that any woman who does not wear one is a slut just asking to be abused. The analogy is grossly misleading.

You say that the burkini is no more sexist than g-strings, high-heel shoes, bikinis, miniskirts, etc.? Horsefeathers. The veil, including the burkini, is a flag of an extremely dangerous politico-religious movement. See the discussions above.

False Meme #7:
Banning the burkini is nothing other than a right-wing Catholic reaction and a ploy to gain votes.

This meme at least has the merit of having some degree of plausibility. There are some right-wing groups who make a pretence of supporting secularism, or at least some version of secularism, whereas their real agenda is to exploit fears of immigration. In France, the Front National (FN) is the most obvious example. However, this reason taken alone is an extreme oversimplification. For one thing, if among immigrants we may find a significant number of fundamentalists or even extremists—and that is certainly the case for Muslim immigration—then such fears are not unjustified. More importantly, we must recognize that groups such as the FN, even if we consider them to be extreme right-wing, are far less extreme than Islamofascism. Political Islam is undoubtedly the greatest threat to secularism in France and is far to the political right of the FN.

False Meme #8:
The situation of Muslims in France today is similar to that of Jews in Nazi Germany.

This outrageous analogy is completely over the top. It is an odious insult to both Jews and the French. In reality, there is a certain proportion (and they are not a tiny minority) of Muslims in France who are Islamists or sympathetic to political Islam; they have much more in common with Nazis than they do with Jews.

False Meme #9:
Opponents of the burkini are misusing secularism as a tool to persecute Muslims.

This is perhaps the most damaging of all these false memes because it is potentially the most effective at neutralizing opposition to political Islam. First of all, the target of any hostility is political Islam, not all Muslims. Secondly, the idea that secular principles must be applied exclusively to state institutions is simplistic. The fact that secularism is first and foremost a program of governance, to be applied to public institutions, does not imply that secular principles cannot be applied elsewhere as well. Given the danger which political Islam represents (and the veil is one of its major tools), if secularism can mitigate that danger then so much the better. That is not a misuse of secularism, rather it is what secularism is for: preventing religions from imposing themselves on the public, so as to protect freedom of conscience.

Next blog: Multiculturalism, Orientalism and Exoticism