I report how Status of Women Canada promotes the Islamist hijab as if it were an expression of freedom! Waleed Al-Husseini is infuriated by such fashionable nonsense, and I agree with him completely.

IWD (March 8th) was over a month ago, so I am late with this topic. Better late than never.

For International Women’s Day (IWD), Status of Women Canada, a federal government organization whose mandate is to promote “equality for women and their full participation in the economic, social and democratic life of Canada,” issued a series of five infographics.

The second of the five infographics can seen on the left. It shows a woman wearing an Islamic veil with the text, “#MyFeminism is about equality for everyone.”

Shortly after the Status of Women published this material, Waleed Al-Husseini published, via Facebook, his own, angry reaction. Waleed Al-Husseini is an atheist blogger and writer who was emprisoned in his native Palestine on charges of blasphemy against Islam and eventually took refuge in France. His books Blasphémateur ! Les prisons d’allah (Blasphemer! The Prisons of Allah) and Une trahison française — Les collaborationnistes de l’islam radical dévoilés (A French Betrayal—The Collaborators of Radical Islam Unveiled) are essential reading for anyone who wants to understand how Islam its political variant threaten freedom and human rights in any country where they succeed in getting a foothold, in particular France.

Waleed Al-Husseini used the French version of infographic no. 2, adding his comment, “A feminism which submits to religious patriarchy when it is Islamic, but fights against it when it is Christian. Sounds more like a bad joke than an ideology.” I have reproduced Waleed’s posting below. 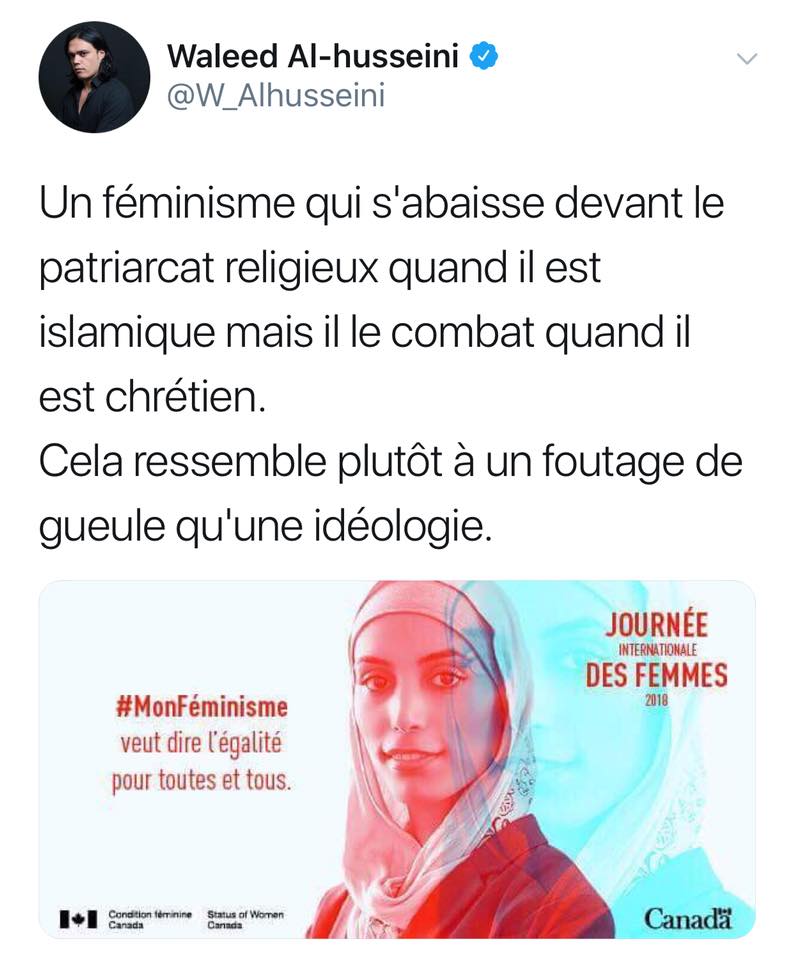 “A feminism which submits to religious patriarchy when it is Islamic, but fights against it when it is Christian. Sounds more like a bad joke than an ideology.”

I agree completely with Waleed’s denunciation of the Status of Women infographic. By presenting a veiled woman as if she were a feminist, by normalizing and legitimizing the hijab, the Status of Women betrays all women, and in particular Muslim women who are under extreme pressure to wear the veil in many countries. The Status of Women chose an odious misogynistic symbol of the world’s most misogynistic major religion. The hijab is a flag of an extreme right-wing political movement and should certainly not be celebrated.

The organization cannot pretend to favour “full participation” for Muslim women when it actively promotes the wearing of an accoutrement which sets them apart, different from other citizens, branded as possessions of male relatives and of the religious group in which they had the bad luck to be born. If the Status of Women is too blind or too foolish to understand the real nature of the Islamist veil, then they are incompetent as feminists.

More recently, Waleed has expressed his disapproval of the idea that police officers in Montreal be allowed to wear religious symbols. In a Facebook post he writes that religious radicalism has become unbearable and adds, “A policewoman wearing the Islamic veil! We must fight back! These medieval symbols are not welcome. I hope that France will be strong enough not to accept such follies.”

Next blog: David Silverman’s Firebrand Atheism, We Need It Now More Than Ever