In this blog I criticize the decision of the editors of a paediatrics journal to use a photo of a veiled girl on the journal’s cover.

It has come to my attention (via a tweet from Ensaf Haidar) that a recent issue (July 2019) of the academic journal Paediatrics & Child Health, Journal of the Canadian Paediatric Society, published by the Oxford University Press, featured a photograph of a young girl wearing an Islamist veil as shown in the accompanying image. (Here I use the word “Islamist” instead of “Islamic” for reasons explained in my previous blog.) 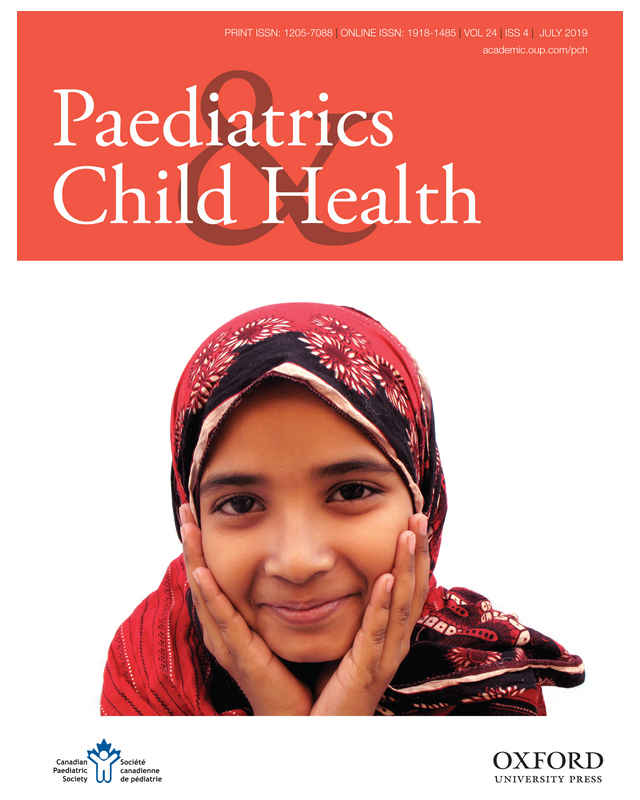 Why would the editors of a paediatrics journal choose a photo of a veiled girl, given that the veil is a flag of an international far-right political movement? The kindest thing that can be said about this choice of cover photo is that it is airheaded fashionable nonsense. The editors have obviously fallen under the influence of the identitarian, islamophilic “left” and their centrist emulators, who are obsessed with religious minorities, especially Muslims, and therefore act as if Muslims can do no wrong, even when it is a radical fringe of fanatic Islamists who are setting the agenda, pretending (falsely) to speak for all Muslims.

Using a cover photo of veiled female of any age, as if such a phenomenon were perfectly banal and ordinary, is bad enough. After all, the Islamist agenda is to promote the veiling of females anywhere and everywhere, regardless of circumstances, with the goal of rendering the veil just that: banal and ordinary, that is to say, to normalize it, to make us forget just what a disgusting icon of women’s subjugation it is. But to use a photo of a minor, especially for a journal devoted to children’s health of all things, is inexcusable!

In my writings I have already pointed out several times that imposing the Islamist veil on a child for any extended period of time (weeks, months, years) is a form of child abuse and should be illegal. Even if the child wears the veil of her own volition, that does not change the situation: after all, we do not allow children to make their own decisions about many things, and I would suggest that wearing such a retrogressive symbol should be one of those things.

As I wrote in a previous blog discussing a similarly unacceptable photo used by the Canadian Human Rights Commission, “The consequences of wearing the veil are very serious for a young girl. There may be negative physical effects (such as Vitamin D deficiency or an impediment to the child’s normal physical activity), but the most grievous consequences are psychological and social. When the person wearing the veil is a child, the social segregation is much more serious, depriving the young girl of a normal childhood and erecting a barrier between her and other children.”

Of course I do not know the context in which the cover photo was taken. Perhaps the girl wore the veil only for the duration of a photo shoot, in which case no harm has been done to her personally. Nevertheless, the use of such a photo for a paediatrics journal remains dubious at best and arguably harmful. Indeed, it is literally unhealthy. It is an affront to children’s physical and mental health, especially the latter.

In fact, I would say that any paediatrician who accepts the long-term veiling of young girls lacks the ability to deal competently with the psychosocial development of children.

Next blog: Another Notch Lower for Canada

A summary of my analysis of the implications of the Islamist veil.

For future reference, I have decided to summarize here an analysis of the Islamist veil and its implications. I could call it the “Islamic veil” instead, but the word “Islamic” applies to Islam in general. However the veil is much more closely associated with the fundamentalist and radical variant of Islam known as Islamism or political Islam, and it is for that reason that I refer to it as “Islamist.” That veil is, after all, a political symbol even more than a religious one. It comes in several versions of course: hijab, chador, burkini, niqab, burqa, etc. This blog summarizes and builds on my previous blog Notes on the Islamist Veil.

In summary, Islamists treat women in general with contempt and they use veiled women in particular as tools for their political purposes. Recall that Islam is arguably the most misogynistic of all major religions, and that political Islam is a fundamentalist variant which takes that misogyny to an extreme.

Finally, it must be emphasized that all of the above observations about the Islamist veil apply regardless of the mentality of the woman flaunting it. The objective meaning of the veil does not depend on the thoughts of the bearer. She may be naïve, she may be totally unaware of the implications of the accoutrement she has “chosen” to display or been forced to display or, on the other hand, she may be fully cognizant that she is effectively supporting political Islam. In all cases, she is just one more veiled woman, one more walking advertisement for one of the most dangerous extreme right-wing movements on our planet.

Thus, the wearing of the Islamist veil should be discouraged and it should be banned where appropriate to do so. There are three main contexts (this list may not be exhaustive) where banning is appropriate:

In other situations, the wearing of the Islamist veil should be tolerated for reasons of personal freedom, but it should be neither endorsed nor encouraged—and certainly not celebrated as some governments (such as Canada) foolishly do.

Next blog: This Does NOT Promote Child Health